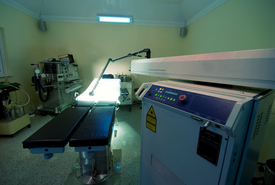 In June of 1989, Gholam A. Peyman, MD, received a patent for a procedure in which surgeons create a corneal flap, and then ablate underlying corneal tissue to correct refractive errors. The procedure, now known as LASIK, was subject to exhaustive clinical testing for the next decade. In 1999, ophthalmic excimer lasers were FDA approved for use in LASIK surgery. Since then, it has become the most popular form of refractive surgery in the United States.

Although Peyman received the first U.S. patent for LASIK, there are a number of other experts that played a role in the development of the procedure.

Development of the Microkeratome

Spanish ophthalmologist Jose Barraquer was living in Bogota, Colombia when he developed the first microkeratome in the 1950s. The microkeratome is a bladed instrument that is used to create thin flaps in the cornea. Barraquer used the microkeratome in a procedure he called Keratomileusis, which was designed to correct refractive errors. During the procedure, a layer of the patient's corneal tissue was removed; the layer was frozen and reshaped in a cryolathe, and then re-attached to the cornea. Unfortunately, Barraquer's Keratomileusis procedure had an important drawback: the freezing process damaged the corneal tissue. As such, the Keratomileusis procedure did not gain widespread acceptance among eye surgeons.

Development of the Excimer Laser and PRK

Excimer lasers were developed in the 1970s, and their initial widespread use was in the production of microelectronic devices. In 1982, IBM employee Rangaswamy Srinivasin discovered that excimer lasers could ablate living tissue without causing heat damage to the surrounding areas. Stephen L. Trokel, MD, an ophthalmologist working out of Columbia University, began researching the use of the excimer laser to modify the curvature of the cornea in the correction of refractive errors.  By 1983, Trokel and Srinivasin were running excimer laser experiments on cow eyes.

The excimer laser was approved for use in LASIK procedures in 1999. Since then, experts continue to refine the procedure.